Back to the flute

First practice session today.  I think it's been over 30 years since I last played regularly!

I went to a music store down the hill to buy key oil and a beginning flute tutorial.  I bought 2 of them.  The one on the left looks very familiar.  It might be the one on which I learned at 9 years old!  I bought the other as it has some modern innovations, including a CD with MP3's of the little compositions. 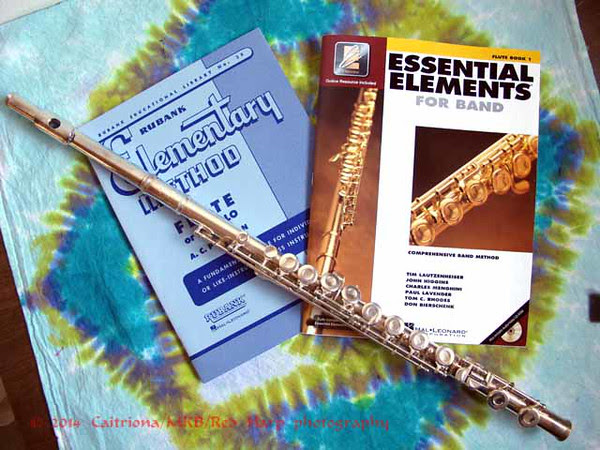 I am hoping to be able to play at least at the intermediate level fairly soon.

I'm going to go back to Michigan in October for a memorial concert in honor of the music teacher I had for 9 years.  He died recently at the age of 90.  Some of his former students who still live in my home town are organizing the concert.  Many of them play in the community band and some of them are professional musicians and teachers.  They have invited everyone who was taught by John Cummins to return and join the band for one piece.  I'm hoping it is a fairly simple one.

Other than my parents, John Cummins was probably the most influential person in my life.  He taught me, and all of us who paid attention, so much more than music!  I believe I owe much of my success in life to the lessons I learned from him.  The fact that I was his student for so many years made the impact greater.

I find during this first practice session that my embouchure (lip position) muscles tire quickly.  I also don't quite remember the fingerings.  On the plus side I have no trouble reading music.  I know what notes they are just not all the fingerings.

My flute, at least, is in good shape.  I had it overhauled some years ago.  A former student of mine who went on to earn a Master's degree in Flute Performance told me many years ago that the mbouchure hole on the flute's headjoint was defective!  I had it replaced at the time of the overhaul. So now I can finally play the lowest notes easily.

Since I'm going to Michigan, I will also see friends and relatives.  I've not been back to Michigan since about 2002.
Posted by Caitriona at 5:54 PM No comments: