In retrospect, it would have been better to go out sketching in the morning rather than doing errands then.  The weather is a beautiful, sunny, 75 degrees!  After my eye surgery follow up appointment, my right pupil was so dilated it was uncomfortable to be out in that very bright sun.  After the appointment, I drove over to the Bellevue Botanical Garden but there is still a vast amount of construction going on.  Between that and my dilated eye, I decided to just go home.

The exam was a bit discouraging.  MD thought my eye exam showed better vision.  However, I'm back to fairly blurry vision out of the new prescription in my right eye.  He also said it's possible that I might never get 20/20 correction again in the surgical eye.  However, it will continue to improve over the next few months. And the retina looks good with no sign of the previous problem.  So, at least, that's all good!

Once home I put on two pairs of sunglasses and a hat to do a spot of gardening.  The irises are almost ready to bloom.  There are 2 lilac blooms opening.  I tied up the bleeding heart and then cut a couple branches to put in a vase. 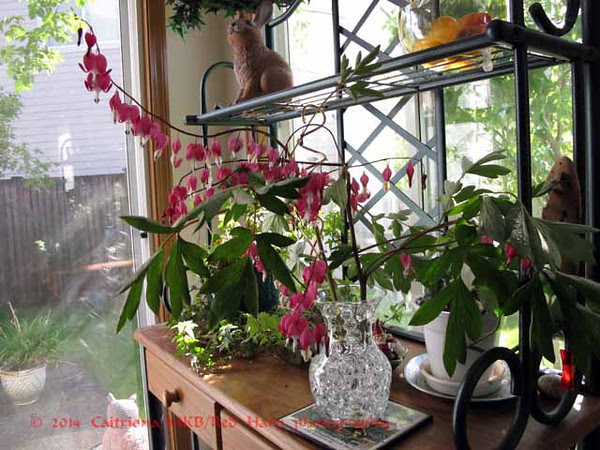 Yesterday, I bought this packet of water gems.  I heard about them on Gardening with Cisco. 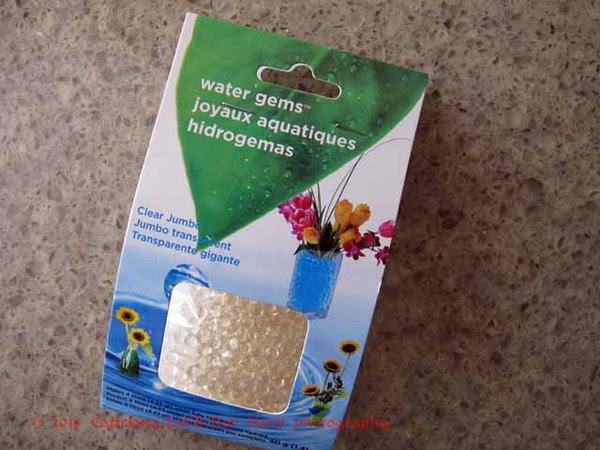 Once 10 grams is hydrated in a liter of water, they become this and are a source of water for the plant. 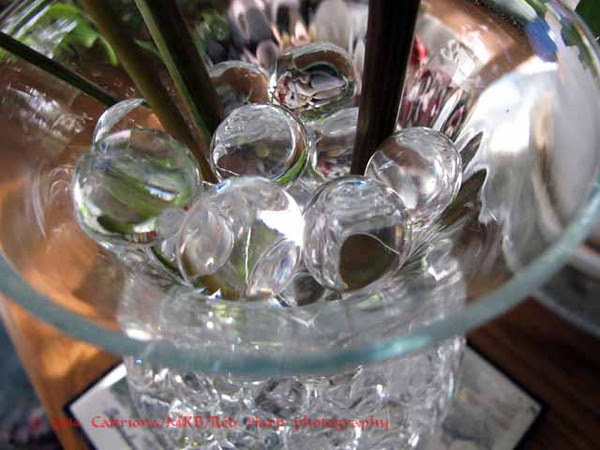 Posted by Caitriona at 11:40 PM No comments:

Grimm Spoiler for this week

Do not read any further if you don't want to be spoiled.  I'd promised to keep these photos off the web until the episode aired.  It will still be  a few weeks until it does and at that time I'll have a few more photos.  But for now, the show's Facebook page and it's own previews have already showed this spoiler.  I no longer feel bound to not show my photos.

These were taken on the day Wanda and I watched the filming of a scene from upcoming Episode 322.  All those Photos are here and there are no spoilers.  I've shared them before.

Scroll down to see if you either don't care about being spoiled a little or have already seen the very spoiler-y ads and previews.

The Grimm Spoiler gallery is here.

Here is a photo of the new Grimm: 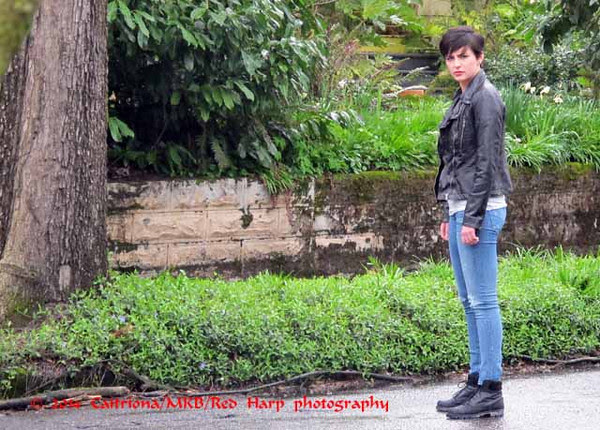 Here is some info off the show's website:  "Meet Teresa "Trubel" Rubel, a young woman played by newcomer Jacqueline Toboni, a University of Michigan student who was discovered when one of the show's producers visited the school in February".  Yay for Michigan!


Posted by Caitriona at 4:58 PM No comments:

I'm back from 4 days at Norwescon.  Wanda drove up from Portland to go with me and we shared a room.  We got back to my home Sunday afternoon.

I'm still catching up on 4 days with no internet!  The hotel offered free wifi but the bandwidth was so poor it took more than 5 minutes to connect to anything so I gave up on that Thursday night!

I don't have so many photos this year. My Canon G12 was in for repair. These were taken with the Nexus 5, which is not as good or as easily used camera. So I did not take as many photos.  What I did take are all here.


One of my first ever selfies; this one is with Wanda as we left for the con.  I'm on the left. 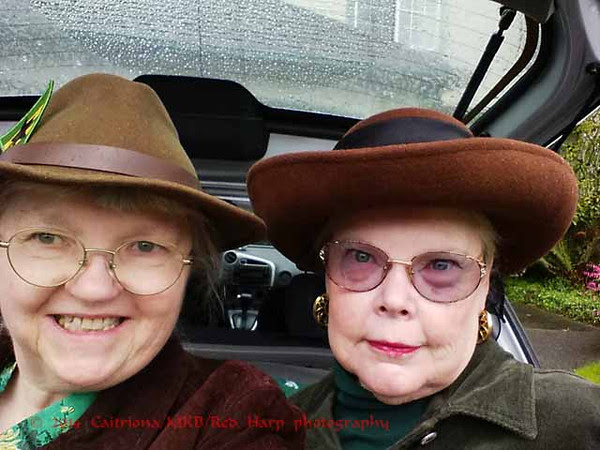 I discovered the Seattle Geekly podcast is back!  They stopped doing it in 2011 so I didn't follow their website anymore.  They had to register a new domain as someone squatted on their old one, which had expired.

I attended 4 different art panels.  Two were discussions and two were figure drawing sessions with costumed models, some of whom I knew! 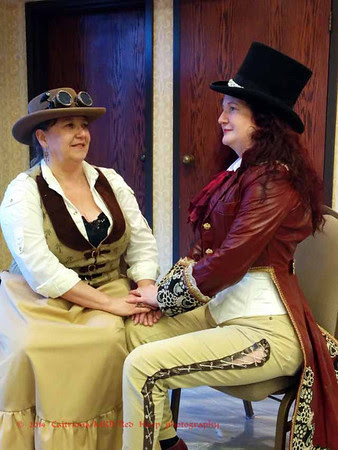 One of the most interesting panels was Behind the Scenes at Kennedy Space Center presented by Hugo-winning SF writer, David D. Levine.  A few facts I noted down from his slide show and talk.  He got to have a very up close tour and then watched a launch.  Water is sprayed on the launch pad during a launch.  It's not for the flames but to deaden the sound.  The sound of the engines alone can damage the rocket!  He said, "from 100 feet away the sound will kill you; from 500 feet away the flames will kill you; from 1000 feet away the alligators will kill you"  (Kennedy Space Center is also a nature preserve).  There are 2 of the huge crawlers which transport a rocket from the build location to the launch pad.  They are named Hanz and Franz.  They get 55 gallons to the mile. 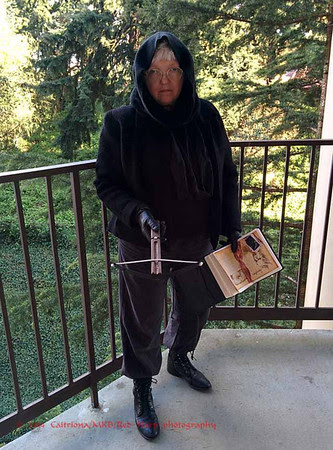 My hall costume for Friday was "Momma Grimm".  It's a version of what Nick's mother wears on the TV show Grimm.  Wolf said it was too obscure and he was right.  I wasn't allowed to carry the crossbow due to weapons policy at the con.  I thought that would help people recognize what I was supposed to be.  Turns out, those people who asked had never even seen Grimm, so they had no reference.  These were taken on the balcony of our room by my friend Bethany.... 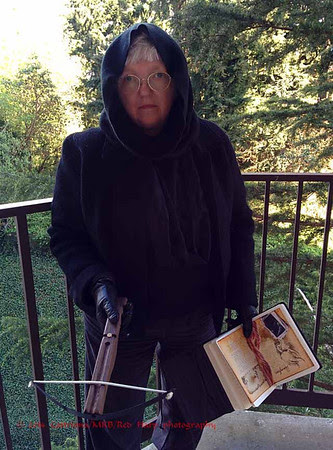 I made a copy of the Wesen reference book from images I found on the web.

Posted by Caitriona at 7:49 AM No comments:

Sigh.  I've had to send my Canon G12 camera in for repair.  For several months it would intermittently not retract the lens.  It finally seemed permanently stuck open.  Canon no longer sells a more complex rangefinder (almost an SLR but no interchangeable lenses) with an articulated view screen.  I love that feature and I just have to have it.  So it's worth it to me to have this camera fixed.  I use it every single day.

It is inconvenient that I've got Norwescon this weekend.  I nearly bought a cheap, simple camera so I'd at least have something small with which to take photos there.  I do have a big Canon DSLR but it's a lot to carry around at a con.  It's my "serious photography" camera.  When I was looking at some cameras on display in a store, the somewhat knowledgeable sales staff told me "small cameras are going away".  He's probably correct.  There will always be a market for high end, semi-pro DSLR's.  But the smaller point and shoot ones will disappear as the phones in cameras improve.  For most people, they are good enough.

I think I'll try to make-do with the camera in my Nexus 5 phone.  So I'm using it more and figuring out how to get it to perform better.

Thus....  the coffee aisle at Target.  Can we say we're a little obsessed with our coffee here in Seattle? 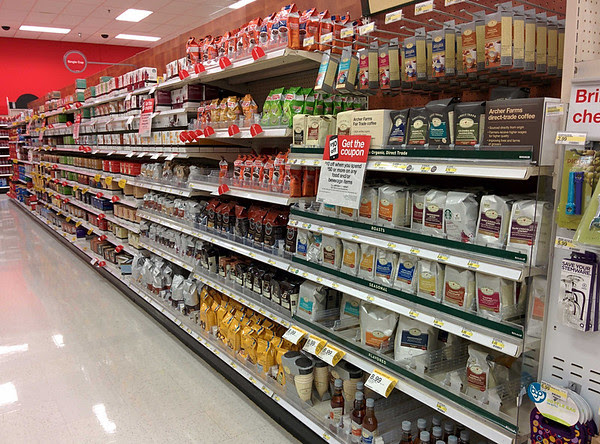 On Saturday, we enjoyed the lovely weather by doing spring clean up in the back yard.  It's all ready for what garden planting we do:  big pots for tomatoes.  This is a close up of a plant, done with the Nexus:

I like that it has automatically blurred the background, auto using a small f-stop.

While cleaning up some stuff, Wolf made this clip bracelet! 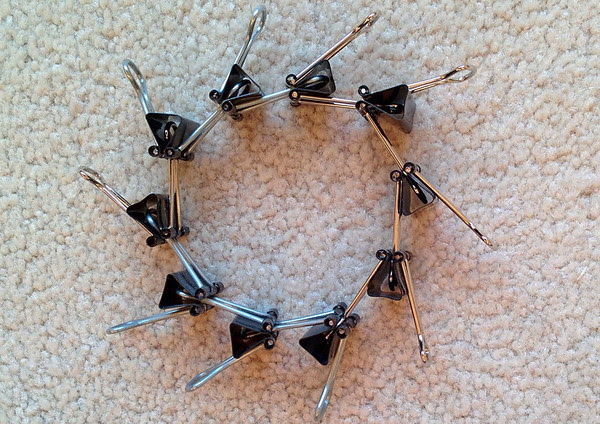 Posted by Caitriona at 5:02 PM No comments:

I just found the Pelicans of the Knowne Worlde list.  I'm amazed by how far down the list I am.  Though, I guess, I am old!  :)