Today I saw this in the Seattle Times and found it so compelling I feel the need to post about it.
Greg Johnson is a Seattle based COAA oceanographer.  He has condensed the 2,200 pages of the United Nations Intergovernmental Panel on Climate Change (IPCC) report into 19 illustrated Haiku.  He painted the watercolor illustrations himself.

See more information and the booklet here.  On that site it is available as several versions in .pdf format.
Posted by Caitriona at 8:40 AM No comments:

A friend discovered this Downton Abbey fabric event at Pacific Fabrics.  I attended with her and another friend.

It was a "trunk show" of the new line of a  special collection of fabrics based on the costumes of the TV show.  The rep told us that Andover Fabrics was invited by the show to create the fabric line.
The rep also told us that there will be Seasons 5 and 6, with the option to go all the way through a 10th season!  Yay!

The dresses on display were 1920's era, which I do not like.  However, I was quite pleased that some of the fabrics in the collection were rather well done reproductions from the early 1900's.  The one I bought was from the Dowager Countess line and dated from 1910.  This compares a photo of the period fabric swatch with the modern cotton I purchased.

We were invited to come in period clothes.  As I said, I really can't stand the '20s.  So I'm dressed in Edwardian-ish, similar to the 1st season of the show.


And I won a prize in trivia.

Complete the sentence "Nothing succeeds like...."   Highlight for the answer:
"excess".  Said by the Dowager Countess (my favorite character)

A few more photos are here.

Posted by Caitriona at 11:13 PM No comments:

2013 in sketchbooks and journals

Here are all the sketchbooks and journals I've filled in 2013.

All but one of these below are full.  The books are Moleskine, Pentalic Aquarelle, Bee SuperDeluxe, Stillman & Birn Beta, and 4 homemade ones.  This is my first full year in my return to sketching.

The journals are all Moleskine except two, the top left is Excompta and the bottom right is homemade, folded pages in a book cover.  My journals are more Commonplace Books, traditionally over the centuries, used to collect quotes, poems, lists.  I write newsly bits and paste in photos, news articles and other bits.

I add lots of ephemera to my journal pages, so the books get overstuffed!

Posted by Caitriona at 11:46 AM No comments:

I've been asleep at the switch.  Well, I really do not follow sports.  I'm sort of perversely proud of the fact that in 7 years of higher education I only attended 1/2 of one sporting event, and that was to see the band (at Central Michigan).  I was so busy in grad school at Michigan State I never even figured out how to get the discounted tickets available to students.  And I was there when Magic Johnson was playing basketball!

I only learned today that MSU is playing in the Rose Bowl because I watched the Rose Parade and the band was marching!  Now I have the game set to record....   mostly so I can see the marching band perform at half time.  Though the talking heads will probably talk over them.  Grrrrr. 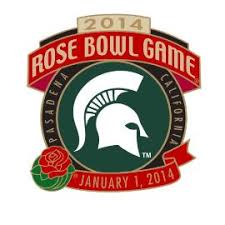 I resisted buying a Rose Bowl t shirt from the Michigan State bookstore website.  I did change into my regular MSU sweatshirt to wear today!

Go Spartans!
Posted by Caitriona at 11:36 AM No comments: