Until I figure out how to attach a file here, the following are available as email'ed pdf files.  Contact me above to request one.
Costuming
I’ve done costuming within varios group for over 30 years. I've found costuming is a way to connect to an historical period and historical people. I saw the original /Star Wars trilogy in the theaters in the 70’s and 80’s. It was the Jedi in whom I was most interested but there was little about them as a group.  It wasn’t until Episode I that I became really interested in Star Wars, because, as George Lucas has said, seeing the “Jedi in their prime in the prime of the Jedi” inspired me. So it was then only natural to want to make the Jedi garb as a way of connecting to these imaginary, but inspiring, people. 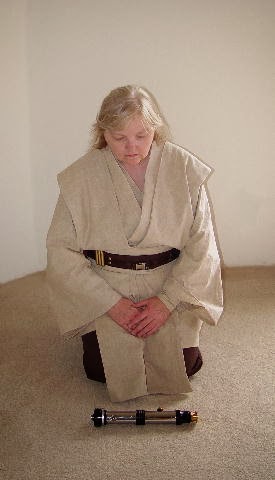 Jedi Costuming book of hand outs includes the following:  These all presume the reader does know basic sewing techniques.
Part I   Introduction, Fabrics, resources
Part II:  Tunics, Sash, Tabards, Pants
Part III:  The Robe
Part IV:  Accessories: Pouches, Boods, Food Capsules, Communicator
Part V: The Belt
These have all been updated in October 2006 to include what we've learned from Trish Bigger's book, Dressing the Glaxay and from seeing the costumes in exhibits.

Making a Jedi Tunic with waist seam:    One thing we've learned is that at least some of the Jedi overtunics have a waist seem.  This allows for more flare in the back, similar to what is seen in Obi-Wan's costume.

I have some photo tutorials.  At the moment they are no longer linkable as that photo host got weird and I stopped paying them.  Eventually I could get around to adding them to my current host.
Jedi Communicator
Jocasta Nu costume
Making a Jedi Belt   starts with a few examples from the films and then shows, in photos, how I made my latest belt.
Making the Jedi food capsules
An Easy Jedi Holocron
Pouches and Bags for Jedi Garb is a small tutorial on how to carry important belongings but not destroy the look of your costume
Tutorial for an Easy Holocron
Even Easier Holocron based on an idea by Kryy Jacobi (Karyn) of The Jedi Assembly
Making a Lightsaber without power tools.
(Be sure to click on the thumbnails, as the construction details are in the captions.) 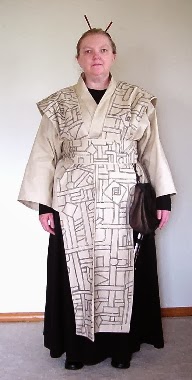 I also made the Jocasta Nu costume in July 2002, soon after Episode II was released.  Though she is a rather unappealing character, I did like her clothes.

I have a photo tutorial, Making Jocasta Nu.  As above, it is no longer on-line.  However,  I also have it available in pdf as a handout (again, contact me by email to request).  Since seeing the actual costume at FIDM, I now know the markings on the tabbards and obi are embroidered.  I am in the process of re-doing this costume with embroidered markings. 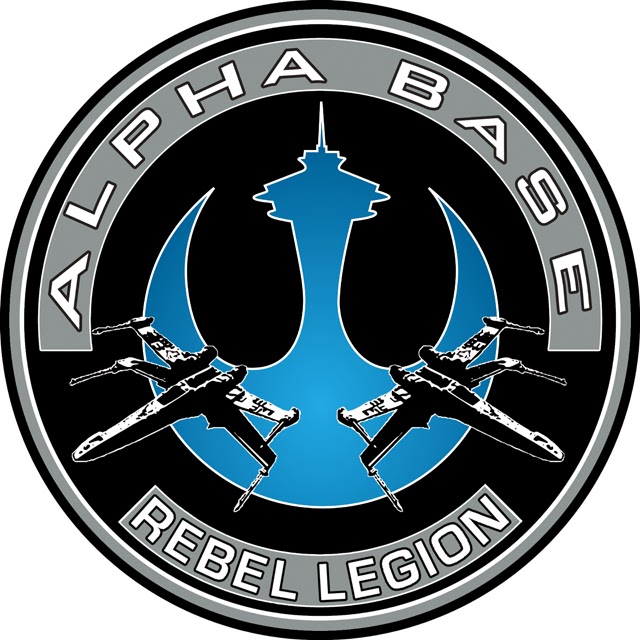 AlphaBase  is the Washington chapter of the Rebel Legion.  For a couple years I was XO and then from October 2005 to 2007, I was the  CO (Commanding Officer) for the Base.


Garrison Titan is the local chapter of the 501st Legion. We do events together, despite we're on opposite sides.

The Jedi Assembly  is a costuming group dedicated to the limited area of Jedi costuming.  I am the moderator for the Western Order and a member of the Jedi Council.