Wolf got a phone call from his MD at the end of Friday.  Since he's been feeling so ill, he hasn't read his personal email.  MD had messaged him that the results on the slow version of the strep throat swap, done on 24 March, did find strep.  So I zipped over to the clinic to pick up the antibiotic prescribed.  Two weeks since with cough and sore throat!  The rapid result strep swap on 17 March had been negative. Since he wasn't getting better, he went back on 24th.  The lesson is, in future, if they do a rapid result swab, ask for a regular one, too!   He's feeling enough better to be at work - from home - today.  It's the first day in 18 that he has been out of bed and vertical all day.

The new lenses arrived for my glasses and have been installed.  I guess my vision is better.  Until I get used to them, the verdict is out.  It was not an immediate, "oh, I see so much better".  Not at all.

My knee:  had my first PT today.  It actually doesn't hurt much.  I have a set of 4 exercises to do that will strengthen the muscles around the knee.  I go back in 10 days.  Unless I have a set back, I think it will be good enough for me to do the walking necessary to re-join my sketching group.  Our next outing together is 11 April.
Posted by Caitriona at 6:44 PM No comments:

We arrived at the Prescott St. house about 10:30.  There was already lots of activity.  Electrical cabling ran up and down several streets to generators a block away from the house.  All the photos from 3 days of stopping by are here.

As we stood to watch, one of the crew we'd seen before came up to talk with us.  He said told us the director would arrive in about a half hour and then the actors would be here about a half hour after that to film some exterior shots.  We conversed for about an hour on a wide range of subjects.

The exterior set of the house was fully dressed for filming.  Compare this image from Monday to how the house looked today:

The child's swing is removed from the left of the porch, the Magnolia is added on the left, 2 chairs are on the porch, the door is changed out, plants hang along the porch and the steps have plants and a frog on the steps.

Once the director arrived, there was even more activity.  There we so many crew, most of them standing around.  Sound equipment arrived and then the big cameras.  They set up some equipment in the driveway next to the Grimm house and used that garage to get out of the rain, too.

They started to block out the shots using stand-ins for David (Nick) and Bitsy (Juliette), seen here on the porch.  From this image, I now know this is Season 3, episode 22.

Then a small Mercedes bus arrived.  I correctly predicted it transported the actors.  Here is David (Nick) arriving:

For the next hour or so they filmed Nick and Juliette exiting the house, walking down the steps, getting into her car and driving away.  The head of security talked to me about photographing and said I couldn't show any of these photos of the actors doing the scene...... at least until the episode has aired.   So I will post those later.  And I have a pretty big spoiler that one of the crew let slip.  But I also won't share that yet.

Silas (Monroe) showed up to hang out with the crew!  He's in the red jacket:

Despite the pouring rain during part of the time spent on the sidewalk across the street, it was fun watching the process of filming.


Posted by Caitriona at 7:16 PM No comments:

Wanda came to pick me up at the hotel and we headed out to see what was happening at "Nick's house".  Sure enough, the film crew was there.  They changed a couple things about the exterior of the house.  The child's swing was gone from the porch and an extra Magnolia bush had been added.  Why?  Lots of trucks from Universal Studios and other kinds of equipment spread through about 4 blocks!  Set up was definitely in progress but not filming.

We went on to the Museum, arriving about 1100.  I was a bit underwhelmed by the exhibit.  They certainly assembled many valuable pieces of art and other artifacts from so many other museums.  Most of it was late period, 18th century.  My knee was hurting so we didn't go through any other part of the museum.

Had lunch at an Italian place that served carbonara.  It was OK but not as good as I remember from Florence!

Then we drove around to some landmarks that Wanda wanted to show me.

Back to the room to watch a bit of TV on the internet.  Then about 1930 headed out to find dinner.  Drove around and around.  Wanda couldn't find the Middle Eastern place she'd suggested so we ended up back at an Irish pub where we'd been a couple years ago.

On the way back, we crossed Prescott again so headed back up to see whether they were doing any night filming.  There must have been a half dozen police cars with flashers on guarding the several blocks around the house.  We found an out of the way place to park and walked over.  Lights were on in the house but no obvious filming.
Posted by Caitriona at 7:04 PM No comments:

I made a 3 day trip to Portland to visit a friend.

Monday 2014 0324  Photos are here.
Don was up when I left, which was about 8am.  He wasn't feeling much better.  On the way south, I stopped at Point Defiance Park.  I'd found on line that there were supposed to be cherry trees there.  I found one.  I sketched it! 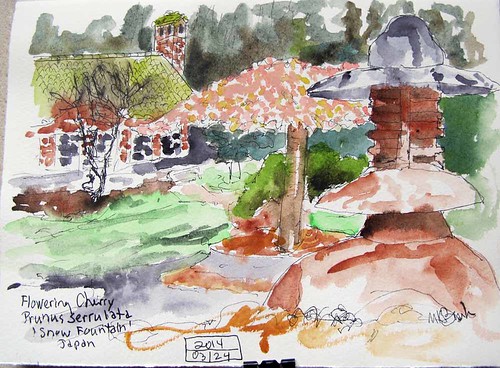 Back on the road to Portland.  Arrived about 12:30pm.  Wanda hadn't eaten lunch, so we went to her favorite tiny place.  Then on for our self-Guided tour of Grimm locations!

We easily found Nick's house.  There were signs outside marking No Parking for 3/25-27 due to "Filming".  Yay!!!  We're going over to see whether we can catch it!

The lot where Aunt Marie's trailer is stored was harder to find.  There was no actual street number at the location.  By process of elimination, it seems to be this vacant lot

We gave up trying to get to Portland Police station.  Between blocked streets, one way and traffic, we just had a hard time getting there.

So the next stop was Rosalee's herb shop.  The address turned out to be a bike shop.  I wondered how they turned that into the shop.  Then Wanda noticed an empty door next to it with no number.  But it seemed much more likely to be the location used for filming! It was on a block with the Salvation Army shelter and Oregon Leather.

Next we drove further south to find Monroe's house.  It seemed to be vacant and was an older home.  It did look like it was just down from the park where the first episode with the runner was shot.

There was a great view of Mt. Hood from that hill!

We went to Powell's.  I didn't find any of the books for which I'm looking.  I did buy the book light that Tina recommended for sketching in the dark!

Check in to my room at McMenamin's Kennedy School.  They've added 22 new rooms in a newly built wing.  It's still just as cool and beautiful as the original building.  We ate dinner there and then I took Wanda back home.  All the photos of the hotel are here.

I did a walk about the hotel as there are many cool rooms and bars.  This is the fireplace in the interior courtyard.

I had a hard cider in the Boiler Room bar.  It was exactly that in the original school.  Did a sketch from my 3rd floor vantage point.

Posted by Caitriona at 6:54 PM No comments:

I'm neglecting this blog in favor of my arts blog.  I'm doing more sketching than anything these days.

Update:  Not much fun and games here lately

Eye surgery:  Disappointing.  After paying a lot of money to have toric lens implant for the cataract, my vision in that eye can't even be corrected to 20/20!  The optometrist explained that the surgery to correct the defect (partial vitreous detachment) is likely the reason I can't get as good a correction as others did who just had a simple cataract surgery.  She offered hope that my vision could continue to improve for about a year post surgery.  Also, I do have to re-frame my disappointment:  the progressively damaging condition was fully corrected and my overall eyesight in that eye was saved.

Knee:  sigh.  I don't know what I did but I sustained some sort of soft tissue injury behind my right knee.  It was very painful and I had to use crutches to get to the doctor.  A few days of complete rest, a brace and prescription anti-inflammatory have mostly done the trick in just over a week.  It still hurts a little but the knee is now more uncomfortable with the brace than without it.

Wolf has been sick with a nasty sore throat and dry cough for a week.  If not much better, he'll be going back to the doctor on Monday.  Poor guy.  He has a prescription but he's still quite uncomfortable.

I've not done a thing with the fabrics I bought at Sew Expo.  One was for printing on and the other painting with Inktense water pencils.  I also bought a Folkwear pattern I've not even opened.

I attended 2 of 3 sessions of an excellent sketching workshop taught by a local artist.  I absorbed more useful techniques about perspective in one morning with her than I have in any other way in the past 2 years that I've been back to art!

I did, however, learn a technique for making my own sketchbooks!  A friend and fellow sketcher taught a workshop yesterday.  A few photos are here.

The method has an exposed spine:

Interesting activities and events are coming up, though.  I'm going to visit a friend in Portland and we're going to do the "Grimm Tour of Portland".   The TV series Grimm is filmed there and actual Portland locations are used for the exteriors.   Norwescon is mid-April.  I'm skipping Emerald City Comicon again this year.

Posted by Caitriona at 12:35 AM No comments: