Force Friday is a much-hyped Disney marketing campaign for the release of new Star Wars merchandise ahead of Episode VII.

Still, I put on my Yoda jacket and went out to see whether there was at least any fabric I wanted.  Yes, there was.  I found these at JoAnn's. 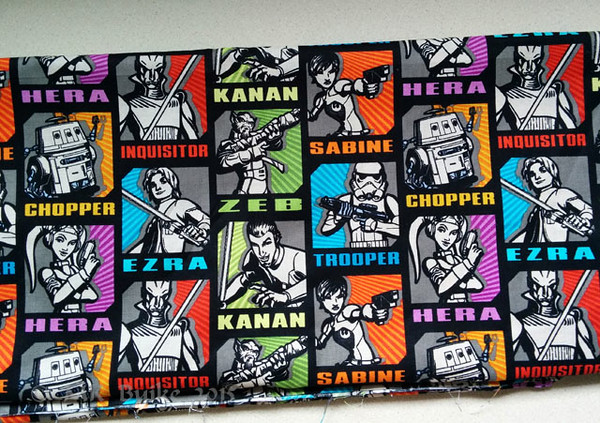 While cutting this one, the clerk didn't even recognize it as Star Wars.   I can't see it because it's on a cable channel I don't get, but I think these are characters from the newest cartoon series.  I have no interest but I got a yard so I could make a pillowcase for the "million pillowcase" campaign for Children's Hospital(s).

According to an email from Pacific Fabrics:  "We've ordered a VERY special collection of 21Star Wars print fabrics..... PLUS, we'll be the only stores in Seattle, Bellevue and Bremerton that will have it for you!"  But they won't arrive until "a week or so later" than Force Friday (today).  Huh?

As long as I was out, I thought I'd go to a couple stores.  Holy carp, but it was picked over.  Target and TRU both opened at midnight.

"Star Wars coming soon"??  I think it came and went!

Posted by Caitriona at 2:48 PM No comments:

The Power of Costume

This is an exhibit at the Experience Music Project (EMP)/Science Fiction Museum.    It is a joint Smithsonian and Lucas Film production.   http://www.empmuseum.org/starwars?code=home   It will tour the country in a 12 city, multi-year tour, but Seattle was the first stop.  It's now about to leave in a month as it closes October 4.

After months of delaying, I finally went to see it today.  I wasn't in a rush as I'd seen the much larger "Dressing the Galaxy" exhibit 10 years ago at FIDM in Los Angeles.

I've uploaded 170 costume images to my photo host at full resolution and without estrictions on downloading.  Please feel free to download and use for reference but note photo credit is MK Buike (aka "JediKai" or Jedi Kai-Thri Ona in the Rebel Legion).   They are all here.

The costume images are between 5-8 megabytes each.  Most are shot at ISO 6400 due to the dark conditions of the room.  Many had to be photographed through reflective glass cases. The display for the Fetts allowed for 360 view, though through glass.

The album starts with the 8 Jedi costumes on display, as that is my personal area of interest.  I was annoyed that Qui-Gon and young Obi-Wan were displayed on a ledge so high it was impossible to see any detail.  Good thing I did see them up close at FIDM so long ago. 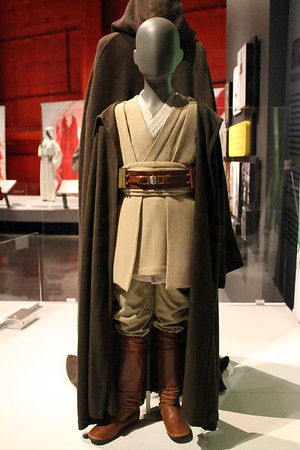 Posted by Caitriona at 8:36 PM No comments:

This was discovered this morning. 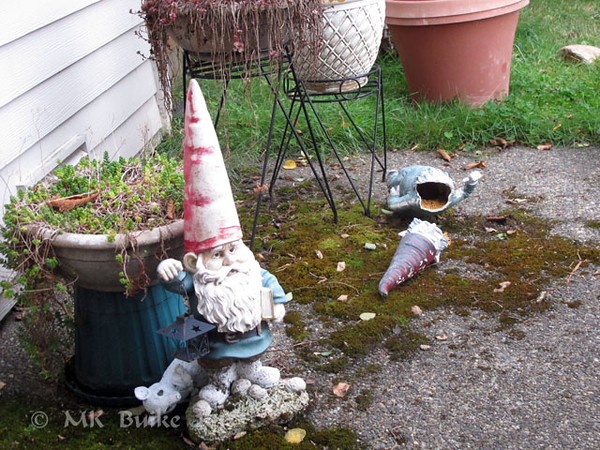 If he didn't go down in the high winds over this past weekend, then I doubt any wind there was last night caused the fall.   My suspicion is that he got into a fight with a racoon and lost. 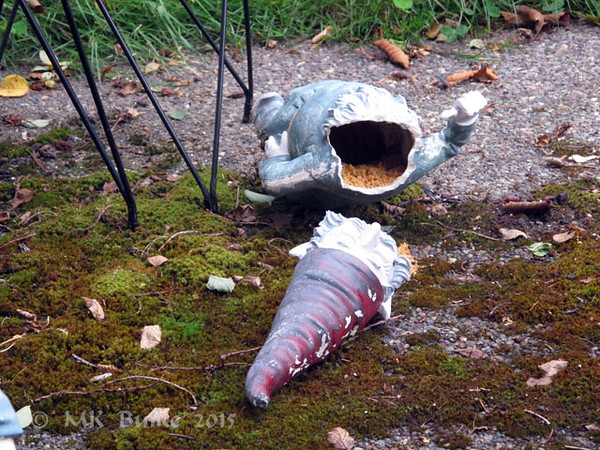 It broke at the same location it had before.  I'd superglued it back together.  Looks like it did not hold. After closer examination, there are a couple more holes and damaged spots.  I am of the opinion he has lost his last fight. 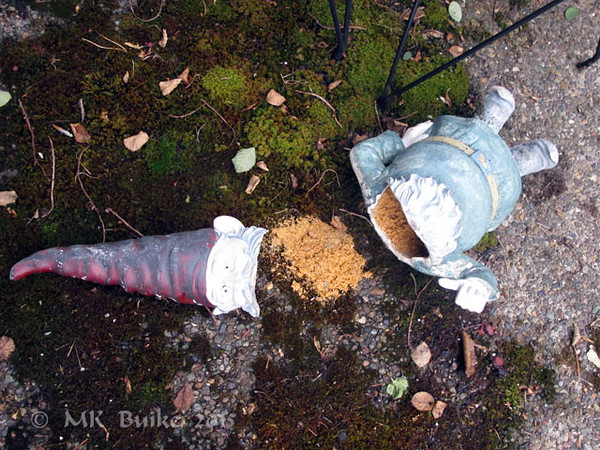 The dirt was in it for weight and stability.

Posted by Caitriona at 10:33 AM No comments:

My apologies for not keeping up this blog.  I spend a lot more time on my sketching blog over on Wordpress.

I went to the re-boot of Anglicon back in mid-June.  All the photos are here. I tried something new.  I only went for one day and took the light rail and the bus over to the con hotel in SeaTac.  It's the same place Norwescon is held.  Since I wasn't wearing an unusual costume, it worked quite well.  I hid the replica weapon in a bag so as not to disturb transit riders!   I don't remember why, but I wasn't feeling very well so I didn't go the second day.

I developed a new costume for this con.  Since it was heavily focused on Dr. Who, I put together a costume for one of my favorite characters, River Song.    There was a home built Tardis there for posed photos and I took advantage of it.

I didn't sew any part of this costume.  The jeans jacket and white blouse are from a thrift store.  I bought a wig on-line.  The replica pistol and holster I already had, purchased for use in a Firefly-ish costume.  There is also a pouch, not shown here, which I also already had.

Several former cast members were there as guests, including the 6th Doctor, Tom Baker.  Photos are on my smugmug host, as linked above.

Some of the clever costumes I saw:

Kristen as a Dalek:

Susie in a Tardis tutu costume made by her mom:

And another River Song

Posted by Caitriona at 10:00 AM No comments: