That item for which I mentioned I was searching was a rubber duck.  Renton River Days has a rubber duck as it's mascot/logo.  They have a Duck Hunt contest every year.  In previous years, one followed clues to find large, costumed, Rubber Ducks.  This year, they are posting location clues and then we must take a photo of ourselves (selfie) and/or a rubber duck in that location.  So I was looking for a classic yellow rubber duck.  It seemed I'd seen them everywhere but today I couldn't find one!

I did another web search and discovered the local Cost Plus has them.  They even have the huge, 8 inch tall duck that was used for the costumed duck contest in years past.   So I ran right out to get this big ducky.  I might yet make him a costume! 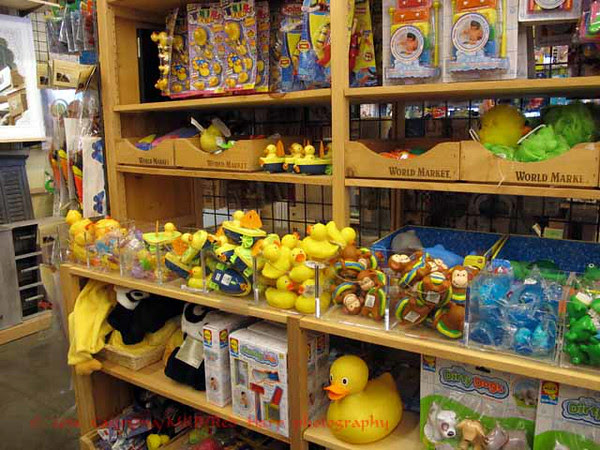 I got the last one on the self... see the large duck on the lowest shelf.

Posted by Caitriona at 5:53 PM No comments:

I was out doing some errands this morning and encountered more interesting sights than usual. 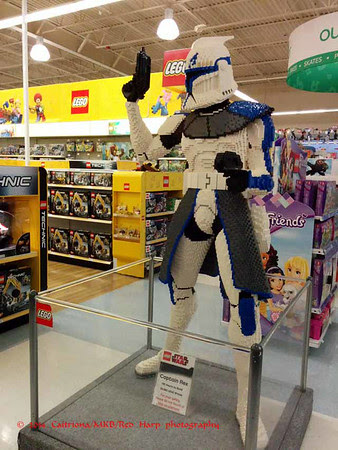 I almost never go into Toys-R-Us but I was looking for something specific (maybe more on that later today).  I saw this impressive life-sized Lego CloneTrooper.  Most impressive! 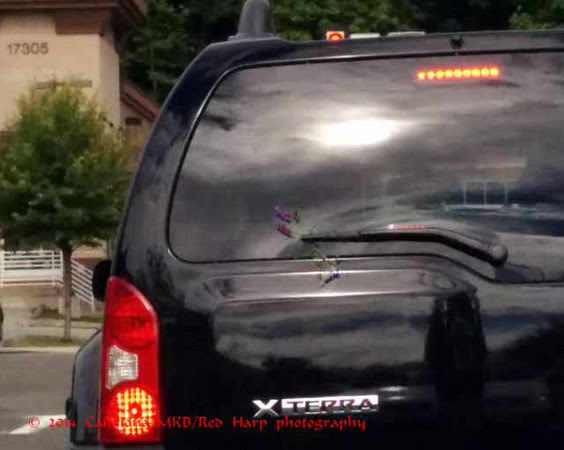 At a stop light, I noticed the vehicle ahead of me seemed to have intentionally added a sprig of flower under the wiper.  I thought it was a nice touch and might do the same.  There are some very pretty weeds under the mailbox that would go nicely there. 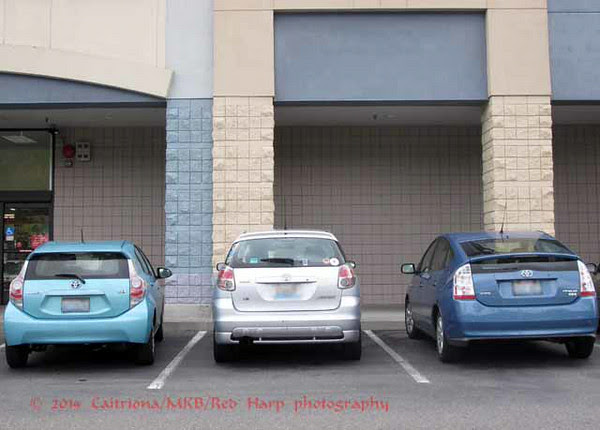 My matrix between 2 Prius Models: the smallest Prius C is on the left. Our Prius is the original body style from 2002 so it might need replacing sometime soon. Just comparing the Matrix size to the others. 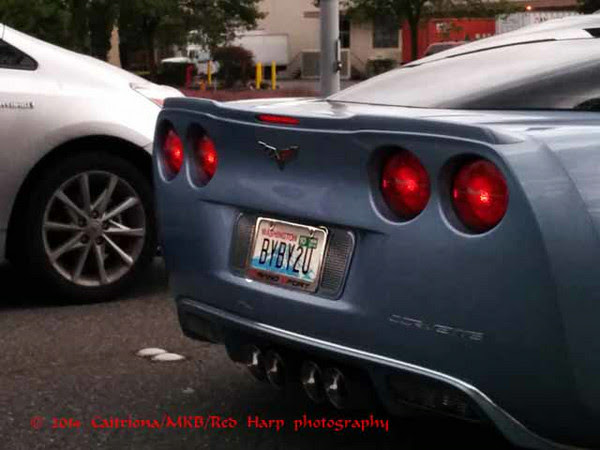 Still on the subject of cars....  this fancy Corvette had what I thought was an amusing (if smug) vanity license plate. 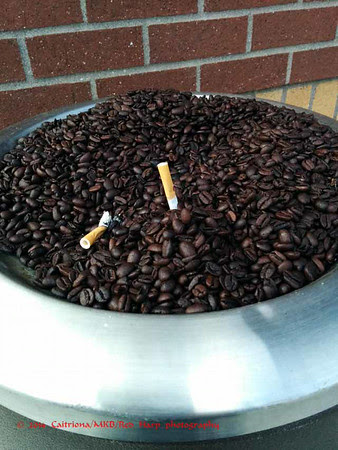 Finally, in the "ewww, gross" department:  Seen outside Panera Bread.  When I'm going in to have a coffee, this is not what I want to see!  I'm actually going to send it to the company with a suggestion that it's in poor taste (so to speak!).
Posted by Caitriona at 1:27 PM No comments:

This is definitely not the way to convert 6000+ slides to digital format.  I does seem to work well enough, though, to do a few.  I want to get 10 or so of my slides into a format I can easily print and use for doing watercolors.

Here is my make shift set up.  Two metal boxes of equal size (OK, they are German Liebkuchen tins, c 1984!), glass between them, sheet of lupo over top with the slide on top of that.  Then a lamp underneath.   I then use my G12 Canon camera with the articulated viewfinder. 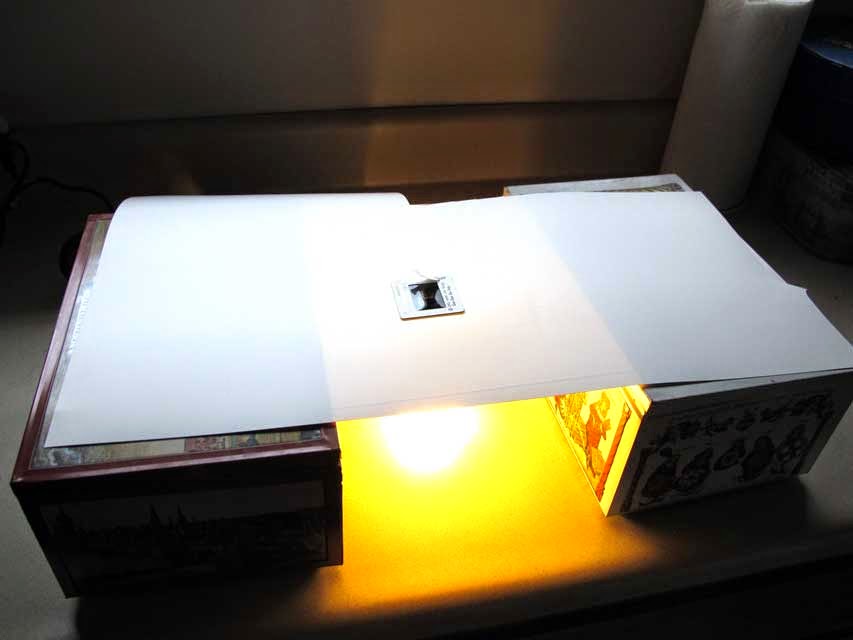 The results are acceptable:

Viscountess Regina in May 1983.  This is one of my favorite photos of her and I never had it scanned.
Posted by Caitriona at 1:08 PM No comments:

Got a Round To it

I finally found the Round To It. I'm scanning the 60 pages of my slide log, dated 1975 to 1986. There are over 8000 slides cataloged. I've been thinking about the need to do this for a long time. And listening to Abney Park while I do it as Wolf has a podcast on speakers as he works next to me.

These slides include my time living in England and Germany, as well as photos of Drachenwald during those dates.

I'll be relieved to have a digital backup for this.  Next problem is how to digitize 8000 slides, plus the slides Wolf has which are probably just as many.    We are probably behind the power curve in buying a dedicated slide scanner. 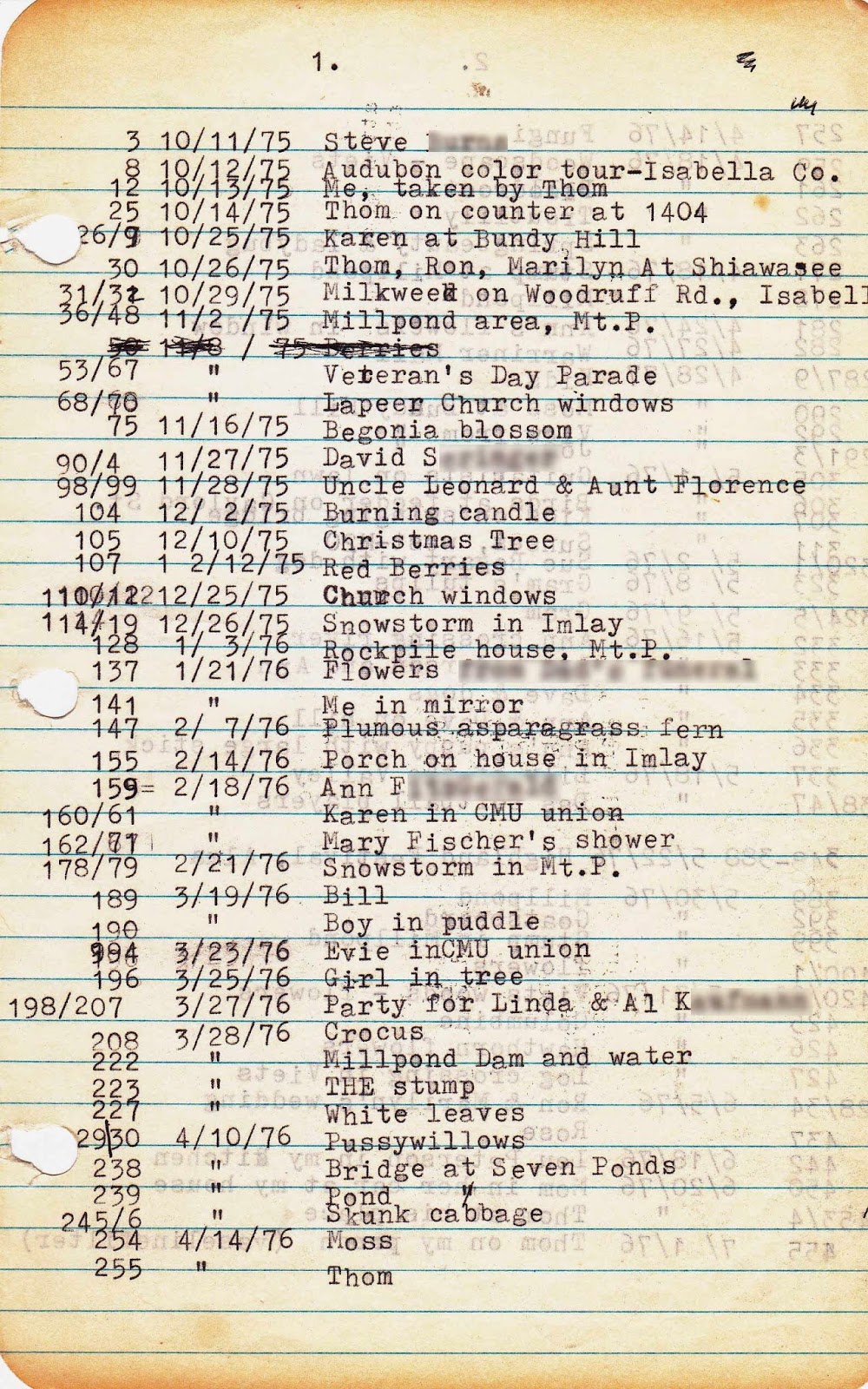 Posted by Caitriona at 11:45 AM No comments:

Seen at Michael's.  Who would buy this?  What could possibly be the marketing plan?  Really, $120 for an instant camera?  It prints a photo of questionable quality and then that's the only one you have.  How 1965!  Well, the fact that it is "credit card sized" makes it somewhat more modern.  But not much. 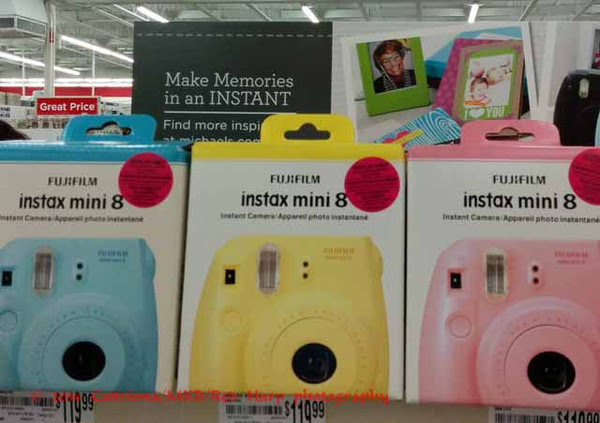 Then there was the pre-Father's Day line of marching grills.  Does walking by 10 of the very same item make me more likely to buy it? 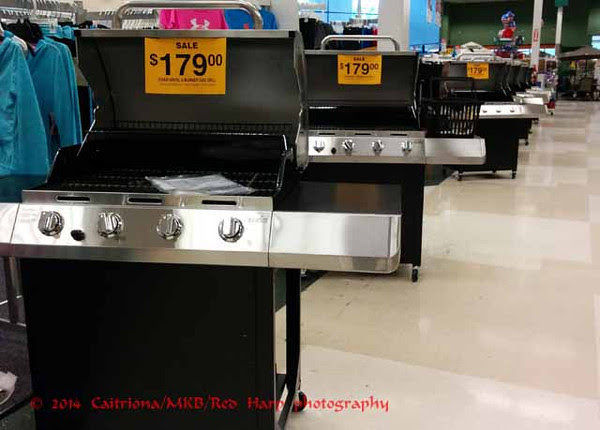 Posted by Caitriona at 9:08 PM No comments:

For no particular reason, I skipped the Georgetown Carnival yesterday.  I did rather want to see the Powertool drag races.  With the main street closed I had no idea about where to park and the website had no hints on that.  My motivation fizzled.

But I have homework!  I'm planning a transition to another position at the Museum of Flight:  Living History interpreter.  I met with the program coordinator last Thursday.  I have some information to read over.  She also allowed me to rifle through the files of potential characters to portray.  I brought home a thick pile of copies on WWI nurses and Katharine Wright, sister to the Wright Brothers.

While the Museum has a costume shop (!!), they don't have late Victorian dress.  So I'll need to make something.  I believe I already have enough in my closet with which to get started if I just wanted to do Ms. Wright.  I'm leaning in that direction. Katharine is on the right. 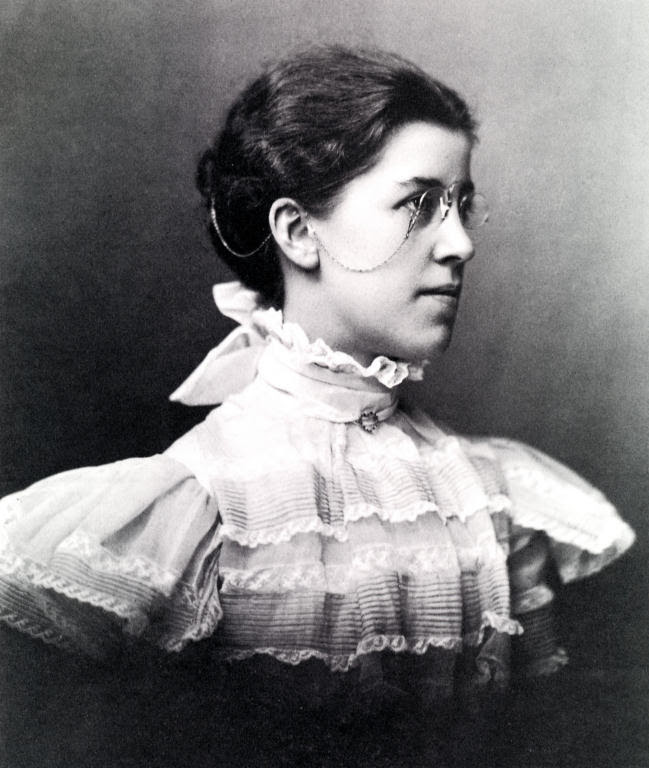 I've also applied to be a Living History interpreter at Fort Nisqually.  I was very inspired by my last visit and discussion with the volunteer there.  However, it's been over a week since I sent the application and no response.  I've sent a followup "did you receive this?" email.  Nadda.  Maybe the coordinator is on vacation?  If nothing in another few days, I'll send it paper snail mail.

With the thought that I might be able to demonstrate period watercolor illustration (which was suggested by the volunteer with whom I spoke), I ordered Cathy Johnson's Living History: Drawing on the Past, which was suggested by a staff member at the Fort.  "She has written several books of interest to living historians or interpreters".  I first became aware of her through Urban Sketchers but she is also involved in historical re-enactment.

On a sadder note, I've been thinking of my cousin, John, whose funeral was Thursday.  I found a nice tribute from the local newspaper.  I also found his full obituary.  My gosh, I never realized he had 15 grandchildren and 11 great-grandchildren!  It has been 12 years since I last visited Michigan.

In the course of looking through these tributes, I found this on the funeral home website.  One can "send comfort food" to the family, as well as flowers.    I guess it makes sense.  We are now so mobile that we live far away from family and friends.  In the past, one made a nice casserole and dropped by to leave it with the grieving family.  Most of the time we can't do that so easily.
Posted by Caitriona at 7:03 AM No comments:

When I went out to get the newspaper early this morning, I noticed this tiny bird's egg on the sidewalk.  I think it might be a Robin's egg.  I looked above and couldn't see a likely spot from which it might have fallen. 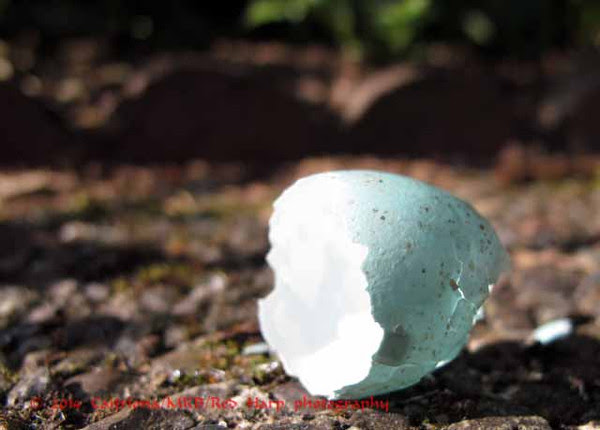 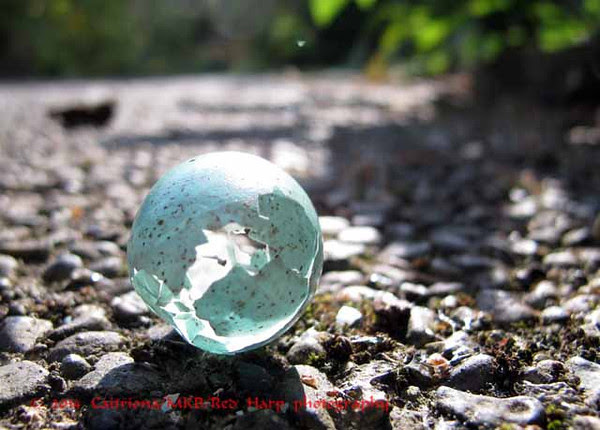 Posted by Caitriona at 5:42 PM No comments:

Three is enough. Can we stop now?

There have been 3 deaths in the past couple weeks among people I know.

The first death was the man who was my music teacher for 9 years.  Mr. C was the only music teacher for the entire school system.  From 4th through 12th grades, other than my parents, he was the most influential person in my life. He died at the ripe age of 90.

My cousin John died a week ago Sunday.  I had not been aware he was ill.  He'd written about a diagnosis but then later stated it had been a lab error.  Then his sister told me he died of that diagnosis.

My husband just learned today of the death of a coworker last Thursday. Glen was the person who first hired Wolf for what has been his career of 25 years.  Glen was also responsible for us moving to Seattle.  He'd moved here a few years before and chose Wolf to transfer for a promotion and move to Seattle.  He was instrumental in the deal that also got me a position at the same time!

Sigh.  After about 3 1/2 months, I suffered a post surgical complication.  The vision was worsening to the point I could not read the newspaper with my right eye only.  My optometrist recommended a return to the surgeon, who found macular edema.  So I'm back on 2 kinds of eye drops for a month.  I had to see a different surgeon as the one who did my surgery was unavailable.  He said my surgeon, partner in the practice, would likely have gone directly to an injection.  However, with a new medication, he has not had to do an injection in a long time.  Unfortunately, this medication is not on forumulary for my health plan.  So I paid for it out of pocket.

It's been just over 2 weeks and I think the vision in the surgical eye is improving.  I have a return appointment in 2 weeks.

I've changed volunteer jobs at the Museum of Flight.  I'm learning the scheduling system for school groups.  It seems like a quite complex bit of computer  software but I'll get it after some practice.  It doesn't help with speed of learning to be there only one morning a week.  I'm not entirely sure this is where I want to be, though.  I was getting a bit bored as a Gallery Ambassador but I did enjoy contact with the museum visitors.  I'd better make up my mind before they invest too much time in training me!

Since I had already had a workshop with her, I decided to dis-enroll from the July Urban Sketching workshop here.  I really want to go to the 2nd Annual West Coast Urban Sketchers Sketchcrawl in Portland.  The next one is likely to be in San Diego and the first one was in San Francisco.  So this is much easier to get to. All the hotels close to the sketching sites are either booked or $400/night.  I've picked something further out but that is right on the MAX light rail.
Posted by Caitriona at 7:32 PM No comments: